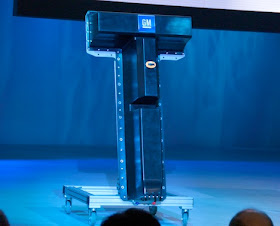 The cost of the high-powered batteries needed for a coming wave of electric cars is projected to drop by as much as 70 percent over the next five years, according to a U.S. government forecast.

The forecast was released as President Barack Obama attended a groundbreaking ceremony for a battery plant being built here by a U.S. unit of South Korea's LG Chem and funded in part by the U.S. Department of Energy.

The Obama administration has provided more than $5 billion in grants and low-cost loans to battery manufacturers and auto companies to support projects intended to spur the development and sale of rechargeable electric cars and plug-in hybrids.

But the high cost of the lithium-ion batteries to power those vehicles has been seen as one of the biggest barriers to their widespread adoption.

The U.S. government had never set a target for the kinds of cost reductions it expected to see in the fast-developing industry it is attempting to jump-start with taxpayer funding.

"Because of advances in the manufacture of these batteries, their costs are expected to come down by nearly 70 percent in the next few years. That's going to make electric and hybrid cars and trucks more affordable for more Americans," Obama told an audience of politicians, business leaders and representatives of the 300 workers building the new plant.

The battery price declines projected by the Obama administration, which has set a target of putting 1 million plug-in hybrids on the road by 2015, run deeper and faster than most forecasts by outside analysts.

LG Chem CEO Bahnsuk Kim told Reuters his company sees a 50 percent drop in battery prices by 2015, and he expected that would be enough to drive increased demand.

"In the next five years we see the prices in half. Our target is half," Kim said on the sidelines of the event today.

Major U.S. automakers have set a long-term target of reducing costs on that basis to near $250, a price that would be in line with the cost to produce batteries for laptops and cell phones.

The lithium-ion battery that powers Tesla Motors Inc.'s $109,000 Roadster cost more than $33,000, according to the Department of Energy report.

The smaller battery LG Chem is supplying for the upcoming Chevrolet Volt from General Motors Co. cost $13,000 last year but will drop to $4,000 by 2015, the report said.

Both GM and Tesla have received Energy Department funding.

LG Chem's Compact Power unit has won deals to supply batteries for the Chevy Volt and the upcoming all-electric version of the Ford Motor Co. Focus.

It said that it had also been selected to supply batteries for hybrid systems which Eaton Corp. is developing for commercial trucks and buses.

Compact Power's Holland plant will have the capacity to supply batteries for up to 250,000 electric vehicles once completed and will employ 400 workers, the company said.

LG Chem and the U.S. Department of Energy split the costs of building the $303 million plant. The Korean chemical and battery maker invested $151.5 million and $151.4 million came from a U.S. government grant.