The TMG EV P001, with 100% electric powertrain and Jochen Krumbach at the wheel, set a new lap record of 7mins 47.794secs to beat the previous lap record, which stood at 9mins 1.338secs, by a very substantial margin.

Using two electric motors, the TMG electric powertrain has a top speed of 260km/h which combined with 800Nm of torque to achieve impressive speeds on the extremely challenging Nordschleife track, which includes significant elevation changes and lengthy flat-out sections.

TMG's target prior to the 29 August record run was to become the first electric vehicle break the eight-minute barrier and this was achieved comfortably on a day when the notoriously changeable Nürburgring weather stayed fine, although track temperatures were relatively low.

Such performance shows TMG's electric powertrain is ideal to power any future single-make electric motorsport series and TMG will begin commercial sales of this technology in 2012. TMG continues to advance its electric vehicle capability for motorsport applications with in-house development of the electric powertrain and ongoing investigations into alternative chassis solutions.

Pascal Vasselon, TMG's Technical Director, said: "The goals for this project were twofold: obviously we wanted to set a new EV lap record and I am very pleased we could achieve that so comprehensively. On the other hand, we also wanted to learn more about the operation of our electric powertrain in extreme circumstances; in motorsport there is no more extreme circuit than the Nürburgring. On the record lap the TMG EV P001 performed better than in testing due to the improvement we already could make based on that experience. We have enhanced our electric powertrain development thanks to the information our engineers have gained and our future EV products will benefit from this project."

Rob Leupen, TMG's Director Business Operations, said: "This is a very impressive achievement which really shows the huge potential for electric powertrains to deliver fast, exciting action on the race track. There's no doubt that electric motorsport can be every bit as thrilling as traditional racing and it was an amazing sensation to watch the TMG electric vehicle fly past on the Nordschleife, with only the sound of wind rushing past and tyres squealing. To achieve a new lap record at the first attempt, and by such a huge margin, is a great achievement and I am very proud to see TMG's name in the record books. But this is not the end of the story for TMG and I hope we will see our electric powertrains in action on the track again soon."

The new lap record was completed on road-legal tyres, using the complete Nordschleife track. It was verified by independent lap timing.

TMG extends its thanks to its partners in this achievement: Aguti created and implemented the livery concept while rational motion integrated the electric powertrain, traction battery and control strategies. EVO Electric motor technology delivered the power. The TMG EV P001 is based on a Radical chassis as modified by TMG for e-WOLF. 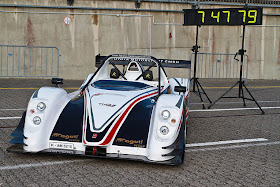