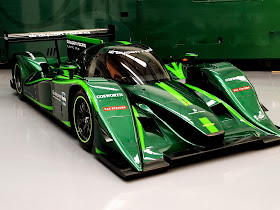 The culmination of Drayson Racing's long experience in green technology since pioneering bio ethanol fuels in 2007, the Lola-Drayson B12/69EV will also take centre stage on Stand 6240, in Hall 6, at Autosport International 2012, from Thursday 12th to Sunday, 15th January. Here visitors can learn first-hand about the technical innovation behind the ground-breaking vehicle, which has been designed to demonstrate the potential of green technologies in the harsh environment of motorsport. Project pioneer Lord Drayson, former Minister of Science and Innovation, Managing Partner at Drayson Racing Technologies and President of the Motorsport Industry Association comments:

“Electric racing represents a considerable new business opportunity for motorsport and underlines the growing commercial potential of green racing and technology. Electric-powered racing is really taking off with the launch of the new FIA Formula E world championship for electric racing cars planned for 2013 and we are thrilled to be at the forefront of the push for innovation at such an exciting time for the sport and industry.

“Indeed, the B12/69EV racing car that we are unveiling today showcases advances such as inductive charging, composite battery power, moveable aerodynamics and electrical regenerative damping, making it one of the most innovative cleantech motorsport project in the world. With over 850 horsepower, it aims to be the fastest electric-powered racecar to lap a circuit.”

Martin Birrane, Lola Group Chairman adds: “This innovative new project will evidence several new technologies with a variety of well-known technical suppliers, to show that zero carbon, clean racing can be fast and exciting, whilst offering a stimulating engineering challenge.”

“This prototype combines revolutionary innovation alongside the development of new green technologies that can be applied across other parts of the motorsport and other sectors. The UK is one of the best places in the world to develop a low carbon business, or indeed, any kind of business. The speed, with which this project has progressed, from initial discussions to unveiling of this vehicle in a matter of months, clearly demonstrates the strengths of the British motorsport sector.

“This development represents a major new business opportunity and underlines the growing commercial potential of low carbon racing. The world needs to know more about what this industry can do and UK Trade & Investment is here to help make that happen.” 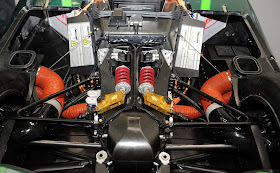 The 700V A123 pack has a capacity of around 60 kWh. The battery pack powers four axial flux Oxford YASA motors via inverters supplied by Rinehart. The motors, up to 850 peak horsepower (634 kW) powering the rear wheels, are mounted in a similar longitudinal location to where the ICE powerplant would normally be located. There is a single speed reduction gearbox/differential linking the drive from the electric motors to the driveshafts.